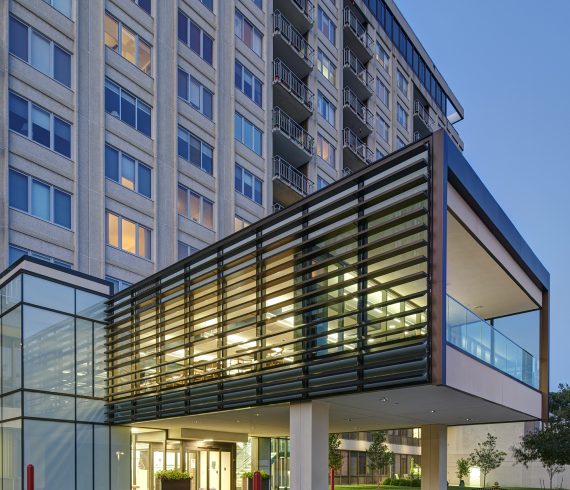 by Brent Schipper· November 23, 2020· in · 0 comments
The existing building is 11 stories of highly repetitive elements set in a cartesian grid.  It is a concrete monolith.  It is Brutalist. The aspiration was to make the building more youthful.  Quite literally to appeal to a younger demographic from the outside and to live younger for the residents who call this community home.  The design team helped to imagine a way of receiving guests based on hospitality paradigms and challenged the archaic terminology and environment of the “Dining Room” with a “Bistro” containing a bar.  The addition, which adds less than 1% to the square footage of the community, transforms how the residents live and gather.  It also serves as a visual  invitation into the building that was often described as cold and uninviting. The entry is focused on a concierge station with mail boxes forming a boundary for the lobby spaces.  The goal is to allow the community to have an active purpose of retrieving mail in the lobby.  Residents engage the lobby and each other around this daily activity.  The lobby has a hearth, an eddy where conversations from the mailboxes can be continued. The bistro on the upper level is focused on views.  The all […] Read More