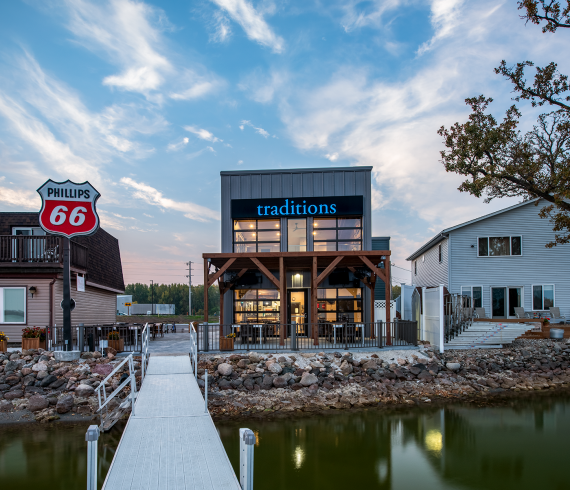 by Brent Schipper· November 25, 2020· in · 0 comments
The Lil’ Store at Twin Lakes was in need of an expansion.  The demand for a convenience store/boat fuel/restaurant/bar was booming on the sleepy lake in north central Iowa.  The little store needed to be much bigger. The footprint was allowed only minor changes due to set backs, parking and utilities.  Zoning regulations had changed significantly since the Lil’ Store was originally built and modified.  Some walls were only allowed in their current location if they remained in place.  Making the Lil’ Store bigger was limited to going up. As the only commercial entity on the lake, the building merited a unique language.  A shed form was chosen to communicate its special role and create a volume that afforded two stories of public gathering spaces with views of the lake.  The building is clad in a metal roof element which extends to the ground on the minor facades and frames the common lake home materials of shake siding and stone. The fenestration is lake focused using numerous glass overhead doors that can be opened in mild weather to connect the restaurant /bar component to the terrace and lake beyond.  The interior is an inviting fusion of wood, concrete and color.  […] Read More