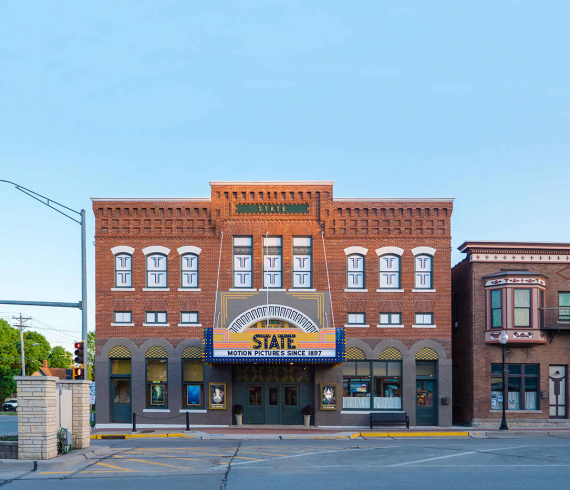 by Brent Schipper· August 12, 2016· in · 0 comments
On November 27, 1893, The New Graham hosted its opening night in Washington, Iowa. The theatre replaced the original 1886 Graham Opera House that was destroyed in a fire on November 1892. Actress Clara Morris was listed on the playbill for her performance in “Odette” and performed to a sold out audience. Today, State Theatre—the name adopted in 1931—holds the Guinness World Record as the oldest continuously operating cinema theatre, having been in continuous operation since May 14, 1897. The first moving picture was shown on a cinematrographe that was made in Paris, France, and show tickets sold for 15, 25 and 35 cents each. While the theatre’s doors remained open throughout the years, time and a fire had damaged the community icon, and with the aid of historic tax credits and grants transferred through the city’s downtown revitalization group, State Theatre was restored back to its 1940’s look. Planning for exterior renovations of the 6,710 square foot building began in January 2011. Removal of the blonde storefront level brick added in the 1970s revealed the original arcade storefront. Special attention was paid to matching the original color, texture and color range of brick and mortar during masonry restoration. Other […] Read More